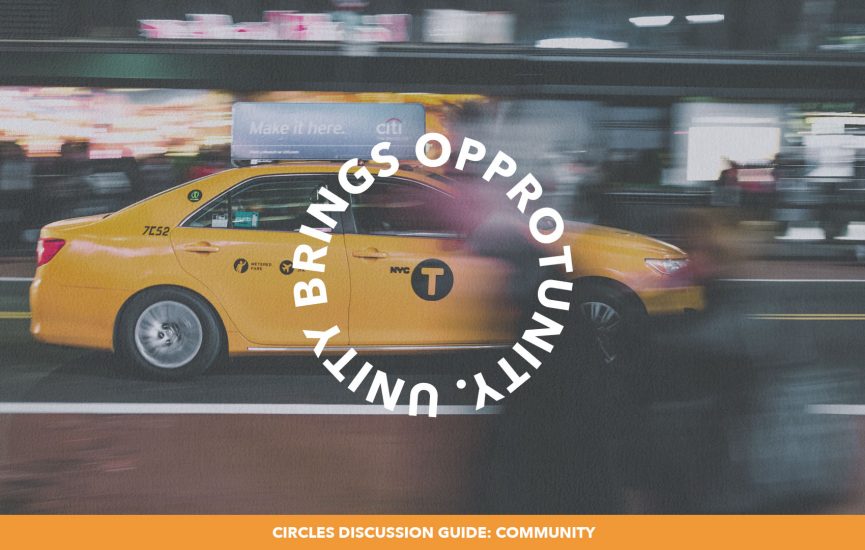 Unity Brings Opportunity
Sometimes our routines get tedious. We wake up around the same time, make the same drive, go to the same school or office, see the same people, and head home to stream the same tv show. Then we repeat — again and again. This can create a bizarre blindness to our surroundings. We simply see our day as a series of obligations, but there are also hundreds of opportunities.

Late one night, my brother found himself stressed out of his mind on a street he’d never visited before. He was traveling for work and absolutely nothing went his way. His flight was randomly cancelled, he was stranded in an unfamiliar city, and he just wanted to catch a cab to a hotel to forget about the whole ordeal. He slipped into the backseat of an Uber at midnight planning not to say a single word. He just wanted to make the drive, avoid small-talk, and give the driver a five-star rating for keeping quiet.

While the streetlights zoomed past him, he could feel something pressing on his heart. God was encouraging him to say something. He decided to break the silence and ask the driver how he was doing. Turns out, the man had an equally awful night. However, he didn’t just say his day was out of control, he said his life was out of control. My brother could have just brushed it off, but he chose to hear the driver out. Then he told him about the peace found in Jesus.

After a powerful, spirit-lead conversation, the man prayed with my little brother. Jesus met him right there on an eerily empty street in Washington DC. What would have happened if my brother never spoke up? What if he didn’t have the courage to ask such a serious question? What if he just chose to sip on his free bottle of water without listening to the nudge on his heart? Well, a person’s life wouldn’t have radically changed.

There is this great Matt Damon movie called We Bought a Zoo. It’s a wild story about a man who impulsively buys an entire zoo full of animals. In the film, Mr. Damon is fearful of talking to a woman he had a crush on. He muttered, “sometimes all you need is 20 seconds of insane courage and I promise you, something great will come of it.” Ultimately that lady became the love of his life. Our lives are comprised of a long series of decisions that only require a few seconds to make:

What school will I attend?
Which route am I going to take to school?
Who am I going to sit next to today?
Will I step up to have this tough talk?
Will I chose to encourage this person who’s struggling?

READ: Colossians 3:23
“Whatever you do, work at it with all your heart, as working for the Lord, not for human masters.”

What would your life look like if you saw every single thing you do as an opportunity from God? What if you came to school every day ready to make a difference? Stand up for that kid being bullied, because God wants to show them His love and heart for the oppressed. Choose to shoot down gossip, because God wants you to believe the best in people. Share Jesus with someone, because that twenty seconds of courage could change their lives forever.

Whatever you do, do it with a mission mindset.

At the start of every day, pray for God to reveal the opportunities all around you. You’ll be shocked at what God will show you. Sure, sometimes it’s hard to share your faith or approach someone you don’t know that well. However, you never know what effects
that twenty seconds of courage could create twenty years from now.

Q2:Where do you have opportunities to serve God and others in your daily routine?

Q3: Think of a time when you helped someone unexpectedly, or someone helped you unexpectedly. How did it happen? Could that opportunity have been missed if you were in a different mindset?

Q4: How would you describe a mission mindset in your own words?

Q5: What can you do this week to start noticing and taking opportunities God has placed around you?