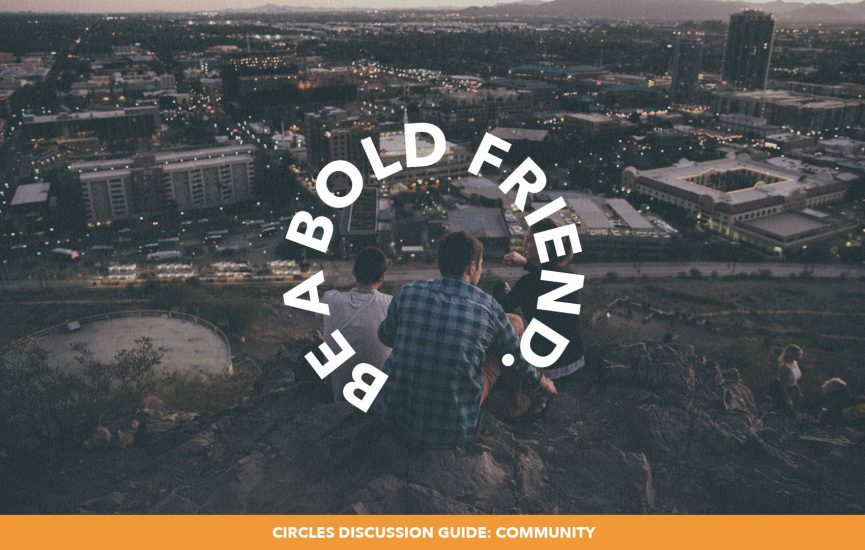 Be a Bold Friend
There was this girl in my middle school that everyone avoided. She wasn’t mean or smelly or anything, she would just get super close to you whenever you had a conversation with her. Not only would she intrude on your personal space, but she also only talked at one, really loud volume all the time. It was kind of like talking to a tiny military drill sergeant. One day, I felt so overwhelmed by this feeling that I wasn’t being very nice to her. Sure, she yelled right in my face whenever we exchanged words, but the words she [loudly] spoke were never anything but kind, uplifting and positive.

I realized I wanted to be her friend, but was scared to reach out. I wasn’t scared of her hitting me or anything. I was just uncomfortable to be seen with her. People tended to avoid her, so what if they started avoiding me too? What if my friends refused to be around me while I was with her? What if they rejected me altogether for standing up for her and pointing out that we hadn’t been very kind? Despite how uncomfortable it was, I decided to do what I knew was right. It was weird and hard at first, but that girl became a life-long friend to me. She is loving, supportive and has been here for me and my family
for more than ten years.

There’s a story in the Bible about a man named Saul who was probably avoided too. He hated followers of Jesus so much that he plotted an evil plan. He wanted to take every Christian prisoner and ultimately kill them. Word of Saul’s persecution spread to Demascus, where a man named Ananias heard of Saul’s violent pursuits. What would you do if a man made violent threats towards you? I know I’d steer clear of him! You’d probably find me on the opposite side of town. But God had other plans for Ananias — crazy plans, actually. God appeared to Ananias in a vision and told him to go to the home where Saul was staying. Not only was he supposed to go see Saul, Ananias was told to place his hands on Saul to heal his blindness.

READ Acts 9:13-14
“Lord,” Ananias answered, “I have heard many reports about this man and all the harm he has done to your holy people in Jerusalem. And he has come here with authority from the chief priests to arrest all who call on your name.” Of course Ananias was uncomfortable with what Jesus was asking him to do! Jesus wanted him to visit and touch a man actively trying to kill him and everyone he cares about. Acts 9:15 continues, “But the Lord said to Ananias, ‘Go! This man is my chosen instrument to proclaim my name to the Gentiles and their kings and to the people of Israel.”

Ananias listens to God. Despite being scared and uncomfortable, he finds Saul, lays hands on him and experiences something incredible. God uses his touch to heal Saul’s blindness, touch Saul’s heart and convert this man who hated Christians into a dedicated follower of Jesus. Talk about a miracle! Ananias got to be a part of God’s life-changing
story for Saul that goes on to change the world. Saul, who was renamed “Paul,” dedicated his life to preaching the gospel all over the world and wrote at least 13 books of the Bible!

Following Jesus is hard sometimes. As a Christian, God asks us to do things that are uncomfortable. That doesn’t mean entering the home of a guy who is trying to kill you, but it may mean touching the life of a guy everyone else has ignored. Or standing up for the girl everyone else has put down. Or sitting with the student who is always alone at lunch. There will be times when you don’t fit in, because you are obeying God’s call. God is calling you out of your comfort zone, because that is where you will truly rely on Him and put your faith into action.

Doing the right thing in those scary and uncomfortable moments will allow God to use you in entirely new and exciting ways! Next time you feel God’s little nudge to do something kind or bold that you wouldn’t usually do, trust Him and follow His call. Jesus may be using your obedience to change a life. Who knows? Maybe that person will go on to change the world.

Reflection Questions
Q1: Who was your first friend when you were little?

Q3: How can students follow Jesus’ example of being there for the people others have ignored and mistreated?

Q4: When have you done the right thing even though it was hard or uncomfortable? How did it turn out?

Q5: Think of one person you’ve felt prompted to be kind towards, but have put off because it’s hard or uncomfortable. What can you do this week to take a step out of your comfort zone and begin following God’s prompt?